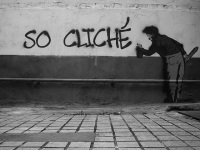 “Clichés began as new, brilliant ideas, phrases, and plot twists. A lot of writers liked the idea so much that they either unconsciously (or, in some cases, consciously) used them in their stories. Their number grew so large that what was considered new and incredible less than ten years ago is a cliché today. However, we’re not going to dwell on the makings of clichés. We will point our fingers to the most popular ones, instead. It‘s easy to slip a cliché into your writing and be convinced you came up with it, which is why you need to be aware of the five clichés we’ve gathered below.